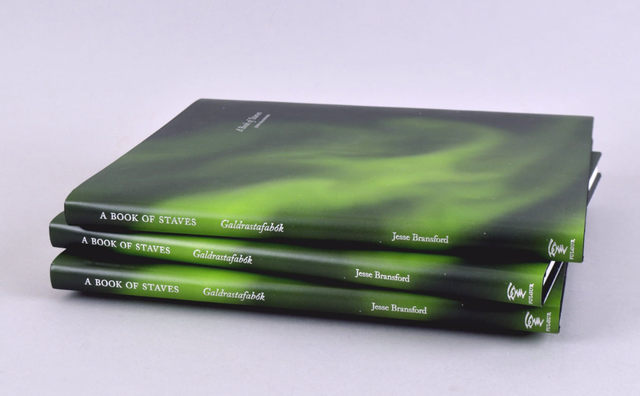 A Book of Staves

Icelandic folk magic and magical texts — so-called low and high magic – combine as sources and inspiration for A Book of Staves by Jesse Bransford. Within we are offered a series of pencil and watercolour drawings that describe the natural world as the artist experienced it in his travels in the Icelandic landscape; the works are spiritual aspirations as expressed through his art.

Creation as magical working is not new to Bransford. For years he worked with Agrippa’s famous texts, then shamanic magic and pantheistic folk magic. But these new works mark a departure by finding the intimate relationship between the creation of art and the working of magic: he calls these Icelandic works “spells,” not paintings. A major collaborative dreamwork project in 2014 brought unrecognisable magical alphabets and languages to his waking consciousness. The “spells” continue the exploration of the power of unreadable text in a magical and artistic context, exploring the liminal space of an inaccessible logic. As visual expressions of magical manuscripts, the Poetic Edda, and runic lore, they are an original and contemporary interpretation of the magical Icelandic heritage. The Sayings of the High One in the Hávamál, spells which were probably spoken, are now talismans invented by the artist by intuiting the essence of the charms. “I wanted to be as involved in the texts as possible, to work in the tradition, and to contribute to it,” says Bransford, noting the development of A Book of Staves.