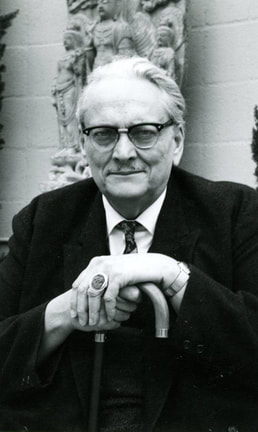 This March 18, 2022, marked the one hundred and twenty-first anniversary of the birth of the most remarkable man I have known, Manly Palmer Hall, author, philosopher and founder of the Philosophical Research Society. In this time of world turmoil, it is important not to lose sight of those who can inspire our actions and aid our survival.

In addition to founding the PRS in 1934, Manly wrote and lectured extensively throughout his adult life, covering virtually all major religious and idealistic philosophical traditions, both Eastern and Western, and from ancient to modern times. Particularly significant works include: The Secret Teachings of All Ages, First Principles of Philosophy, Man: Grand Symbol of the Mysteries, Healing: The Divine Art, Self-Unfoldment by Disciplines of Realization, etc. Further, he published journals from 1923 to 1990, and published The Secret Teachings of All Ages, the definitive work on the subject, at the age of 27.

I first encountered Manly’s writings in 1966 through a local PRS study group in St. Louis, Missouri. Having been raised in a conservative Christian religious family, my first approach to his works was more careful and critical than embracing. I was raised to believe that all the answers to life’s great questions were both simple and clearly available in the Bible. However,  the process of living inevitably provided questions which did not fit neatly with all of my preconceptions. My personal philosophical model was evolving.

In the writings of Manly, I encountered a wide range of philosophies and religions from around the world and throughout history. Manly had a particular gift for writing about religion and philosophy, both exoteric and esoteric, in a clear direct style which has seldom been equaled.  From him I learned much about Eastern and Western Religion, and idealistic philosophy from ancient times onward. This prompted me to explore some of the original texts (at least in translation). Rather than disturbing my world view, this provided new questions which led to new understandings. Not all of my new understandings were easily reconciled with the beliefs with which I was raised, but growth requires change. Manly said, “there are as many religions as there are believers.” For monists, like Manly, there is one infinite reality which we seek to understand in our own individual ways. Further, it is not our duty to dictate beliefs, but to honor and assist others along their own paths.

Manly’s longest autobiographical work is Growing up with Grandmother. It can give the reader a sense of the simple humanity of a man whose depth and breadth of understanding of philosophy and world religion can be intimidating. Also, his PRS Journal and his many lectures give more autobiographical information and insight in to his character. I had the benefit of corresponding with him and knew him personally in his later years, and I hope to be able to convey some of my understanding of him.

For Manly, the most important thing to know about any individual was the age of that soul, which is to say, what was the level of wisdom that was stored there as the result of multiple incarnations (I should note that, for Manly, the soul does not have a gender, being beyond all such differentiations). This consideration transcended all other methods of understanding human beings, or, more accurately, the soul was the only vehicle through which the diverse facts about an individual could be put into perspective. Though Manly wrote extensively on the arts of character delineation and most particularly astrology, he maintained that even a natal horoscope could not be interpreted except in the context of the individual soul. Manly believed that individual souls differed as much from one another as if each were a species unto itself.

Presuming to describe the soul of the most remarkable person I have ever met may border on hubris, but, as the last person continuously associated with the PRS who knew him personally, I will do the best I can. In person, Manly was much like the voice you can hear in his lectures, calm, thoughtful, reverent, knowledgeable, and occasionally funny. Above all, what mattered to him was the message that all wisdom is the birthright of all people and needs to be compassionately applied for the benefit of the world and ourselves. His greatest frustration was that too many of his followers came to see him because of his charisma and not for the substance of his message.

I was once asked by Manly to photograph him and his wife, Marie, at his home. In my zeal to do the best possible job, I had brought far more equipment than I needed. After the shoot, it was taking a while for me to pack it all up, and Manly came out to keep me company while I did so. He was wearing a woolen robe with a hood, and I thought that it might make a very interesting picture. I remarked about this, and he replied that, although it might make a good picture, “…it would cause them [his followers] to think that I studied in Tibet.”

Early on, Manly had wanted to write a work on mystical cosmology, but, in ministering to people in the community, it quickly became clear that what they really needed was the wisdom to help them live better lives. So, he never wrote that book, but he has left us with a wealth of other works to help light our personal journeys and transform our lives.

Lastly, Manly’s second great frustration was that few of the people, who had the benefit of his personal spiritual counseling, had made substantial donations to PRS in gratitude for that help. Over the years since Manly’s death, I have tried to show my gratitude by supporting PRS. I hope that you will be moved to join me and give what you can to help us continue to share the light he lived to serve.
​
-John Sanborn Pillsbury, PRS President
WAYS TO SUPPORT PRS