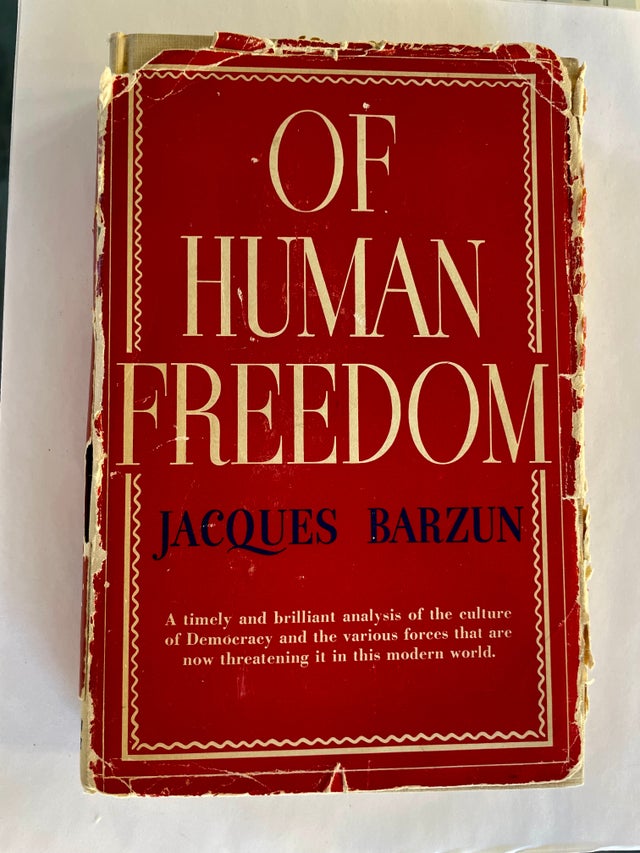 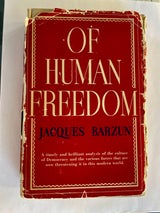 Of Human Freedom by Jacques Barzun

Summary: Barzun begins by explaining that freedom is not primarily a result of certain government policy or structure; rather, it is a condition of the culture. More fundamentally, freedom is a condition that exists to varying degrees in the minds of individual people. Dogma and absolutism—either on the right or left of the political spectrum—are the killers of freedom. He discusses art as a way of expressing the complexity of life, and contrasts such art to principles that attempt to apply identical solutions to differing problems. Absolutism, says Barzun, is a result of a lazy mind repeating slogans rather than looking directly at reality. Absolutists and tyrants can hijack art in furtherance of their desire for power. For example, the Nazis and Fascists denounced each other’s art and latched onto particular genres because of what political movements those genres allegedly represented or denounced rather than any truth that art may have portrayed. Barzun analyzes art created in furtherance of political goals and why such art tends to be dull. He debunks the notion that art is best when engendered from political revolution, and demonstrates how it is rather the opposite that is true. “Revolutionary art” is in fact usually nothing but propaganda.

In describing the state of art in American society, Barzun argues that only a few people ever develop an appreciation for art, and that their appreciation is not a product of superior intelligence or anything else yet discovered. Artists who break ground are often unappreciated in their own time because people fail to recognize their art as depiction of reality. Rather than looking for reality in art, many people instead look for “art” in art. In other words, people make the mistake of critiquing art in terms of how much it looks like other art rather than according to the degree in which it expresses reality. But then what is “reality”? Reality, Barzun explains, is the opposite of dogma. Dogma is a principle or belief which people act on without regard to the specifics of the situation in which they are acting. People are neurotic to the extent that they act on dogma rather than on reality. So if reality is the opposite of this, then reality is acting according to an evaluation of the situation one is in rather than according to abstract principles. Barzun recognizes that society cannot function without at least a little dogma, and some dogma is not harmful. For example, there is no harm in driving on the right side of the road all the time even though frequently there would be no harm in driving on the left either. However, freedom is destroyed to the extent that dogma is increased. Governments that wish to impose tyranny on their people must impose it on the culture. A tyranny must force society to act on dogma rather than reality. This explains why tyrannies attempt to impose themselves on society’s art, believing that directing the people’s art will direct the people’s reality.

Racism is shown for the age-old folly that it is, and not merely “racism” in the sense the word is commonly used today. Rather, Barzun considers any raced-based conclusion regarding a person’s behavior to be rooted in fantasy. This holds true not only for conclusions such as “a person who is Black is less likely to work hard,” but also for conclusions such as “Dostoevsky’s writing resulted from his Russian character.” Both conclusions lack any basis in fact. Barzun shows this to be true by first demonstrating that the notion of race is arbitrary to begin with—for example, various races often overlap and are indeterminable. Then he illustrates the innumerable factors that influence behavior. At bottom, racism is nothing but a fool’s attempt to make sense out of something he does not understand.

Finally, Barzun exposes the delusional belief that utopia can be obtained. Faith in the perfect society—i.e., perfect government—is just another form of dogma. It is a result of the mind mistaking its formulas for reality itself. In trying to enforce utopian policies onto society, those in power inevitably cause more destruction and suffering than would a government that allows for more democracy.

In sum, Barzun’s thesis is that for man to be free he must, as far as possible, recognize the fact that the world is far more complex than any mind can comprehend. This recognition helps prevent man’s beliefs derived from experience from becoming rigid. When beliefs become rigid, they often fail to comport with experience. When beliefs fail to comport with experience but man persists in acting on those beliefs, then man acts in at odds with the world. And when man acts at odds with the world, he suffers and causes others to suffer. When man lives by dogma rather than by reality, he becomes a slave to that dogma and necessarily enslaves others whom his dogma affects. By accepting each experience as new and not forcing it into preconceived notions based on dogma, man allows himself to act in accord with nature. This is freedom.

Pros: This book is full of uncommon insights into how the human mind interacts with reality. Not only is it interesting, but it can help the reader live a better life. It shows how dogma exists in all areas of life and how easy it is to fall prey to it. The reader is compelled to examine his own beliefs and to analyze his own actions. The honest reader will almost certainly find dogmatic behavior in himself that he’d not suspected. Moreover, when a person acknowledges a lie he’s been telling himself and living by, he then is able to recognize that lie in others, and thus become less gullible.

Cons: As hurtful to freedom as dogma can be, it is inescapable. Yes, Barzun acknowledges this, like when he notes that it is useful to force all drivers onto a particular side of the road even though there will be times when driving on the prescribed side is unnecessary. He does not shy away from the fact that to believe that life can be lived without delusion would itself be dogma. However, Barzun could have gone into further detail as to why this is the case, as well as discussing more fully the fact that dogma is an unavoidable aspect of the human condition. As stated above, dogma fails to comport with reality because it tries to analyze new experiences according to principles derived from prior experiences which differ from the experience at hand. However, this does not mean that those principles are useless. After all, they would not be principles if they applied only to the situation from which they were derived. While dogma does result in imperfect decisions, this is as it must be since man cannot achieve perfection. To analyze every situation anew without regard to prior experience may give one a more accurate picture of the world, but it would also paralyze him. Because man cannot fully ascertain reality at any given moment, he frequently must act according to faith that may be incorrect. Otherwise he cannot act at all. There is a time for dogma. Again, Barzun does not deny this. However, he seems to denigrate dogma just a bit too much.