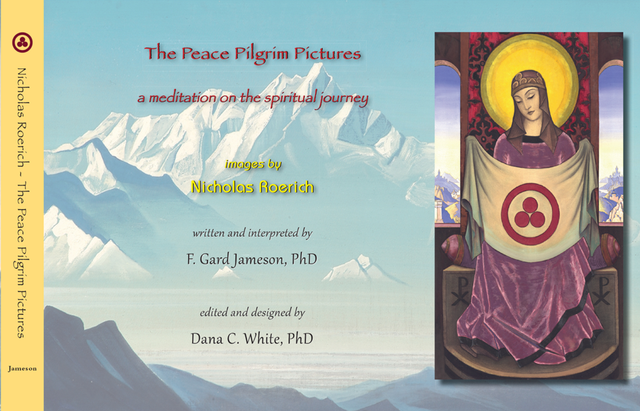 The Peace Pilgrim Pictures: a meditation on the spiritual journey

The Peace Pilgrim Pictures is the sixth book collaboration of F. Gard Jameson and Dana C. White, both alumni of Pacifica’s Mythological Studies program. Published by Copper Cauldron, this book introduces readers to Nicholas Roerich, an early 20th century artist, mystic and influential political figure who after leaving Russia, emigrated to England, traveled to India, and settled in New York, where he constructed an amazing multi-story multi-purpose facility that served as home, studio, and gathering center for arts, students of the spiritual and cosmological exploration, and world politics. Three times nominated for the Nobel Peace Prize, Roerich was a principal in redesigning the US One-Dollar bill to include the pyramid and the all-seeing eye of the Freemasons. The three spheres on Roerich’s Banner of Peace symbolize science, art, and religion: truth, beauty, and goodness. This publication takes the ten stages of the 12th century Ox-Herding pictures as a basis upon which to develop a meditative relationship with the art of Nicholas Roerich.

Gard Jameson, PhD, and Dana C. White, PhD, have enjoyed a fruitful and productive collaboration since 2006 – creating the trilogy: A Story For Our Mythic Moment (Phaethon, Monkey, and the Ramayana). Their most recent book publication is Nicholas Roerich – The Peace Pilgrim Pictures (2019).

Gard Jameson teaches Asian Philosophy at the University of Nevada, Las Vegas. An ordained minister, he serves at Grace Community Church. He chairs the Children’s Advocacy Alliance as well as the Interfaith Council of Southern Nevada. He received his BA in Comparative Religion from Stanford University and his PhD in Mythological Studies from Pacifica Graduate Institute.

Dana White is an award-winning producer, editor and designer who has served industry, education, and non-profits for more than three decades. He received his BA in philosophy from Occidental College, his MA in Communications Management from the Annenberg School at USC, and his PhD in Mythological Studies from Pacifica Graduate Institute, where he currently serves as a contributing member of Pacifica’s faculty. He publishes under the imprint of Copper Cauldron Publishing.