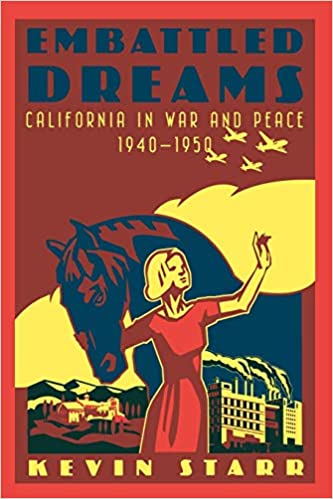 The sixth volume in one of the great ongoing works of American cultural history--Kevin Starr's monumental Americans and the California Dream--Embattled Dreams is a peerless work of cultural history following California in the years surrounding World War II.

During the 1940s California ascended to a new, more powerful role in the nation. Starr describes the vast expansion of the war industry and California's role as the "arsenal of democracy" (especially the significant part women played in the aviation industry). He examines the politics of the state: Earl Warren as the dominant political figure, the anti-Communist movement and "red baiting," and the early career of Richard Nixon. He also looks at culture, ranging from Hollywood to the counterculture, to film noir and detective stories. And he illuminates the harassment of Japanese immigrants and the shameful treatment of other minorities, especially Hispanics and blacks.

In Embattled Dreams, Starr again provides a spellbinding account of the Golden State, narrating California's transformation from a regional power to a dominant economic, social, and cultural force.

Kevin Starr is the State Librarian of California. He also holds the rank of University Professor in the Department of History at the University of Southern California.