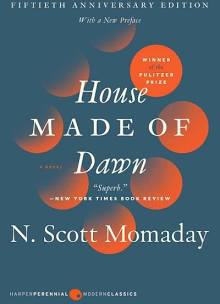 House Made of Dawn

The magnificent Pulitzer Prize-winning novel of a stranger in his native land A young Native American, Abel has come home from a foreign war to find himself caught between two worlds. The first is the world of his father's, wedding him to the rhythm of the seasons, the harsh beauty of the land, and the ancient rites and traditions of his people. But the other world -- modern, industrial America -- pulls at Abel, demanding his loyalty, claiming his soul, goading him into a destructive, compulsive cycle of dissipation and disgust. And the young man, torn in two, descends into hell.