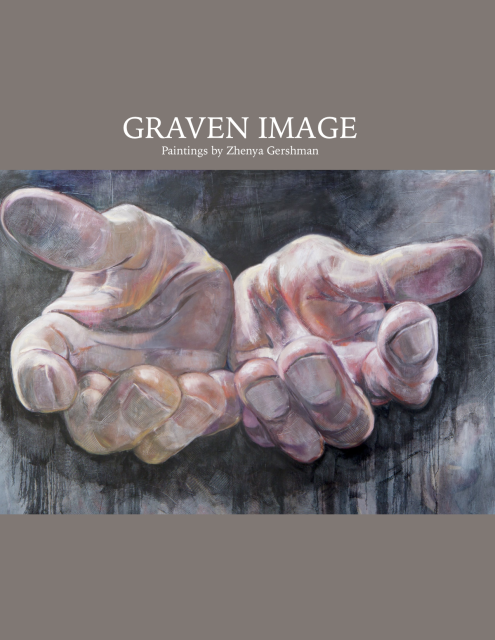 GRAVEN IMAGE is inspired by the Sefer Yetzirah, known as The Book of Creation, one of the earliest surviving books on Jewish mysticism. This group of paintings holds questions more important than answers. To ask a question—is to wonder, to open a door, to see the old in the new way, to engage in a conversation, to embark on a journey without preconceived destination, to discover the unimaginable, to peer into the dark, to be blinded by the light, to challenge the taboos, to follow the destiny. The word Graven itself is directly related to the very root of artistic creation: "And the Lord God formed man of the dust of the ground, and breathed into his nostrils the breath of life; and man became a living soul" (Genesis 2:7, King James Bible). GRAVEN IMAGE is thus a mirror through which the painter invites the viewer to explore the world filled with the "breath of life" together. A particular relevant passage from Sefer Yetzirah is beautifully loaded with meaning and poetry:

GRAVEN IMAGE merges traditional oil painting with unorthodox sculpture technique application. Experimenting with ceramic tools allows the artist to literally carve out the material and physically engrave into the body of paint. As a result, a sculptural painting⏤a hybrid form of art is developed, stimulating the viewer to experience two-dimensional art in a surprisingly tactile and phenomenological way. This technique facilitates a kind of psychological archaeology in portraiture, challenging the core of a viewer's perception of the very border separating what we call our reality and that of art.

Artist Bio: Zhenya Gershman is an internationally renowned artist. She was born in Moscow and held her 1st solo exhibition in St. Petersburg at age 14. She was selected as a subject of the TV documentary film Our Generation, a project dedicated to searching for the five most talented teenagers in Russia, showing hope for the cultural future of the country. The youngest student to be admitted to Otis Art Institute, Zhenya graduated with Honors and later received her MFA from Art Center College of Design. Today, Gershman's portraits are featured in public and private collections including Douglas Simon and Richard Weisman (she is included in the book Picasso to Pop: The Richard Weisman Collection). Gershman's portrait of Sting was acquired for the permanent collection of the Arte Al Limite Museum in Santiago, Chile. Zhenya participates in important international exhibitions including Art Aspen, Art Miami, and Art Chicago. The GRAMMY MusiCares Foundation selected Gershman to create portraits of Bob Dylan and Bruce Springsteen. Her exhibition "Larger Than Life" was broadcast by Entertainment Tonight, Extra, and featured in The New York Post. A documentary film, The Model's Artist, highlights Gershman's innovative approach to working with artists' models. In 2000, Gershman was a recipient of ALEX Award in Visual Arts from The National Alliance for Excellence, Honored Scholars and Artists Program, presented by Peter Frank, who is quoted as saying that Gershman's effort evokes not only Whistler's and Sargent's but that from which they took inspiration, Manet's and Velazquez's⏤masters of the figure who in their own ways avoided the banal literalities of their contemporaries for a rendition truer to the vagaries of vision, and (thereby) to the dynamics of human presence.

In addition to her artistic career, Gershman is an independent scholar and a museum educator. She has worked for over a decade at the J. Paul Getty Museum, and has contributed to such exhibitions as Rembrandt's Late Religious Portraits and Rembrandt: Telling the Difference. As a co-Founder and President of Project AWE, a nonprofit foundation for the arts and education, Gershman has dedicated her scholarly and charitable work to provide new dimensions in understanding and experiencing the cultural icons of Western European heritage. Gershman's groundbreaking discovery regarding the presence of a hidden Rembrandt self-portrait was published by Arion, Boston University and was brought to European audiences by Le Monde. She continues to work in her studio and is currently working on a book Dürer's Labyrinth: Melencolia in the Context of Early Modern Knowledge following her article Dürer's Enigma: A Kabbalistic Revelation in Melencolia §I published by Brill's Aries Journal.