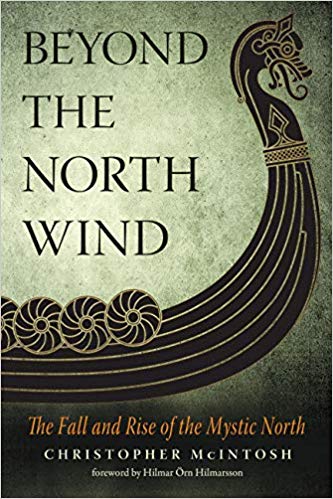 Beyond the North Wind: The Fall and Rise of the Mystic North

“The North” is simultaneously a location, a direction, and a mystical concept. Although this concept has ancient roots in mythology, folklore, and fairy tales, it continues to resonate today within modern culture. McIntosh leads readers, chapter by chapter, through the magical and spiritual history of the North, as well as its modern manifestations, as documented through physical records, such as runestones and megaliths, but also through mythology and lore.

This mythic conception of a unique, powerful, and mysterious Northern civilization was known to the Greeks as “Hyberborea”—the “Land Beyond the North Wind”—which they considered to be the true origin place of their god, Apollo, bringer of civilization. Through the Greeks, this concept of the mythic North would spread throughout Western civilization.

In addition, McIntosh discusses Russian Hyperboreanism, which he describes as among “the most influential of the new religions and quasi-religious movements that have sprung up in Russia since the fall of Communism” and which is currently almost unknown in the West.

Christopher McIntosh is a writer and historian specializing in the esoteric traditions of the West. He was for several years on the faculty of the Centre for the Study of Esotericism at Exeter University. He is the author of many books including Gardens of the Gods. He holds a DPhil in history from Oxford, a degree in German from London University, and a diploma in Russian from the United Nations Language School. Christopher has a long-standing interest in nature-oriented belief systems and in particular the Nordic Heathen movement. He lives in Lower Saxony, North Germany.

Hilmar Örn Hilmarsson is the Allsherjargoði (high priest) of the Ásatru community of Iceland. He is an internationally celebrated musician and a composer of film music, who has written the scores for such films as Children of Nature, Cold Fever, and In the Cut.