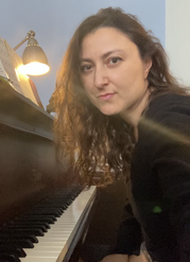 Marina Pacowski was born in France and is based in Los Angeles. She is a multi-faceted artist:
multi awarded concert pianist, sought after accompanist, and vocalist.

As a pianist and vocalist, Marina has toured internationally, performing extensively in France,
Italy, Spain, Germany, the Netherlands, and Belgium, as well as in the United States where she is
currently residing in Los Angeles. Along the way, she has performed and/or lectured at such
prestigious venues as Salle Gaveau (Paris), Kursall (San Sebastian, Spain), and major
universities in Berlin, San Francisco, Lincoln (Nebraska), the University of Cincinnati (Ohio),
and the Eastman School of Music in Rochester, NY. Composers write virtuosic pieces for her,
and she has recorded at Greaves Hall in Cincinnati a piano concerto written for her by composer
Frank Proto, accompanied by soloists from the Cincinnati Symphony Orchestra.

​An accompanist and lover of chamber music, Marina was awarded the 2017 “Best Collaborative
Music Award” by the International Society of Bassists, in a jury committee that featured bassist
Ron Carter.

She is also laureate at the Belvedere International Competition in Vienna, Austria, in the category
of Opera pianist musical director.

As a jazz vocalist, Marina has performed at the L.A. jazz hot-spots The Jazz Bakery and The
Lighthouse (“La-La-Land”) and was featured as a guest vocalist for a tribute to guitarist Kenny
Burrell at the Catalina Jazz Club. She received a Jazz Excellence Award in 2021 at Feinstein’s at
Vitello’s in Los Angeles, alongside other award recipients such as Jacques Lesure, in a ceremony
hosted by Rhonda Hamilton of KJazz. Marina was also featured as special guest at Catalina in
March 2022 for the Salute to Black Legends, where she paid tribute to Ella Fitzgerald.

Marina Pacowski is a passionate music educator. She was faculty member in France at the
Conservatory of Music “Maurice Ravel” for many years prior to her arrival in the US. She now
maintains her own private studio in Los Angeles, teaching piano and vocal jazz improv classes.
She is also regularly invited to teach clinics and master classes in festivals and music camps in
France and abroad. She is lecturer and guest educator for the next Jazz Workshop in Tarnos
(France) in August featured as the vocal improvisation and scat teacher.

Marina Pacowski is contributing musician at the Philosophical Research Society in Los
Angeles where she created, performs in, and hosts the concert series “Spirit and Music”, now in
its third season.

Spirit and Music Series
PRS presents a special series that explores the relationship between spirit and music by focusing on the life and context of the composers, literature that relates to the performers themselves, aspects of the instruments, and reflection on style hosted by singer and pianist Marina Pacowski.
​EVENT CALENDER