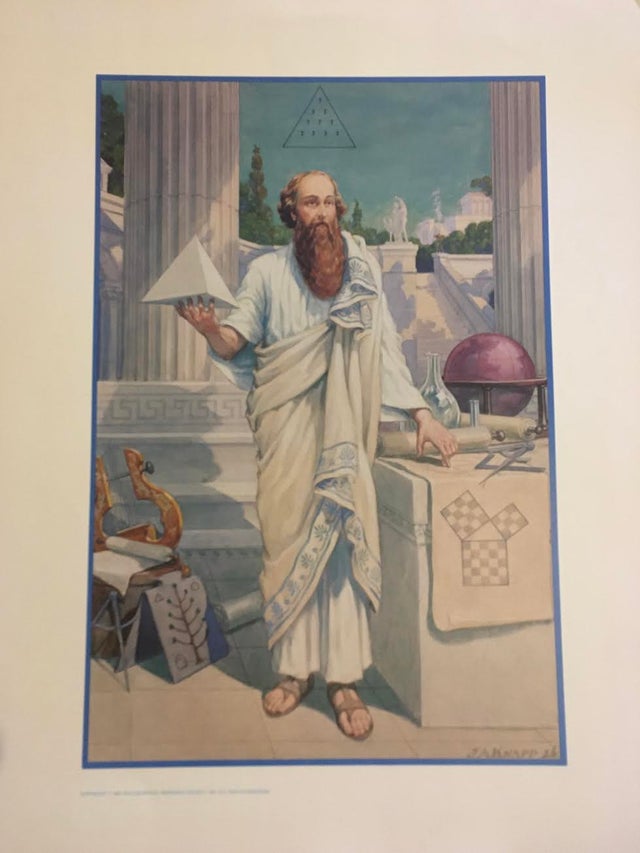 Original work by J. Augustus Knapp (as commissioned By Manly P. Hall for The Secret Teachings of All Ages)

* ON SALE - small 1/2" tear along bottom of remaining vintage posters.

Though Pythagoras excelled Plato in the profundity of his philosophic deductions, the transcendental element in his doctrines has provoked the ridicule of materialistic modern science. All too lightly the world has passed over the achievements of the first “philosopher” to whom it is indebted for so many of the basic theorems of mathematics, music, and astronomy.

The twentieth-century student of Greek philosophy has been taught to associate the name of Pythagoras with such puerile issues as his golden skin bone and his ban upon the eating of beans! It has also been held against Pythagoras that he delivered his discourses from behind a curtain, preached in allegories and enigmas, and revealed his scientific knowledge only to such initiated disciples as had spent many years to self-discipline. His sciolistic critics, however, have failed to consider the manner in which Pythagoras obtained his immense wealth of abstract learning The Mysteries of Greece, Egypt, Persia, and India without exception bound their initiates to inviolable secrecy. –Manly P. Hall, The Secret Teachings

Beautiful vintage print from the 1980s