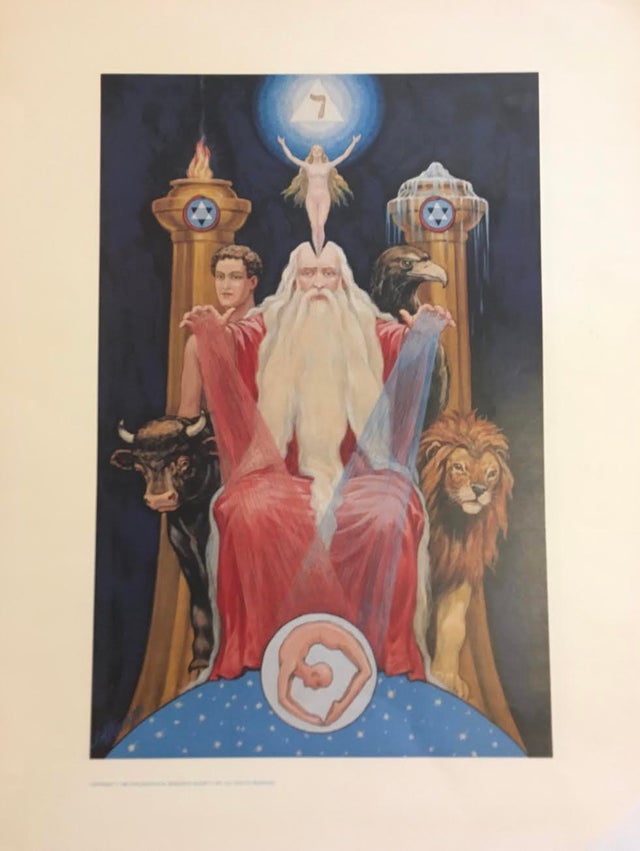 The Ancient of Ancients - vintage print

Original work by J. Augustus Knapp as commissioned By Manly P. Hall for The Secret Teachings of All Ages

In the Greater Holy Assembly, it is written of the Ancient of the Ancients that He is the Concealed of the Concealed Ones, the Eternal of the Eternal Ones, the Mystery of Mysteries, and that in His symbols He is knowable and unknowable. In the Zohar, His robes are said to be white, but they are here shown as red to signify that the garments of Divinity partake of the nature of cosmic activity. His face is declared to be the likeness of a face vast, luminous, and terrible. He sits upon a throne of flaming light and the flashes of the fire are subject to His will. The white light streaming from His head illumines four hundred thousand worlds. (Some texts read forty thousand superior worlds.) The glory of this light shall be given unto the just, who are called “the sacred fruits of the Tree of the Sephiroth.”

Thirteen thousand myriads of worlds come into light from His skull, from which issues forth a mysterious dew having the power to awaken the spiritually dead into everlasting life. The length of “The Great Face” is declared to be three hundred and seventy thousand myriads of worlds; therefore it is called “The Long Face.” The appearance of the Ancient of the Ancients is that of the Aged of the Aged, who had been before the beginning and whose throne stands upon the firmament. By the Aged of the Aged is willed “The Short Face,” or creation, which is the chariot of the Most Holy of the Most Holy.

Beautiful vintage print from the 1980s