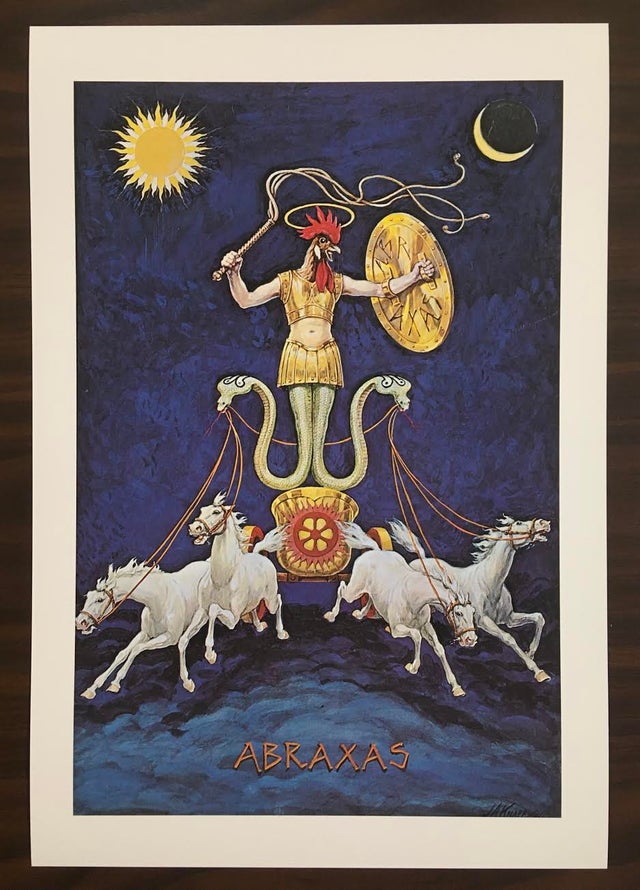 (as commissioned By Manly P. Hall for The Secret Teachings of All Ages)

The name ABRAXAS, coined by Basilides, the Egyptian Gnostic, is a word symbol consisting of seven letters that signify the seven creative powers or planetary angels recognized by the ancients. Sampson Arnold Mackey advances the theory that the name is compounded from two ancient words, ABIR, which means bull, and AXIS, which means the pole. To substantiate his belief, he brings forward the fact that a motion of the earth, commonly called the alternation of the poles, results in the vernal equinox taking place at one time in Taurus, the Celestial Bull, over the North Pole. The four white horses drawing the chariot of ABRAXAS symbolize the four ethers by means of which the solar power, ABRAXAS, is circulating through all parts of the universe.

The seven-lettered name of ABRAXAS is symbolically significant of his seven-rayed power. That the modern world has any knowledge whatever of ancient Gnostic symbolism is largely due to the cupidity of those individuals who set themselves the task of destroying every intelligible record of Gnostic philosophy; for, wishing to keep rather than destroy articles of commercial value, these fanatics preserved gems upon which Gnostic gems were undoubtedly used by members of the cult as means of identification. As the order was a secret society, the designs were small and inconspicuous. –Manly P. Hall, The Secret Teachings