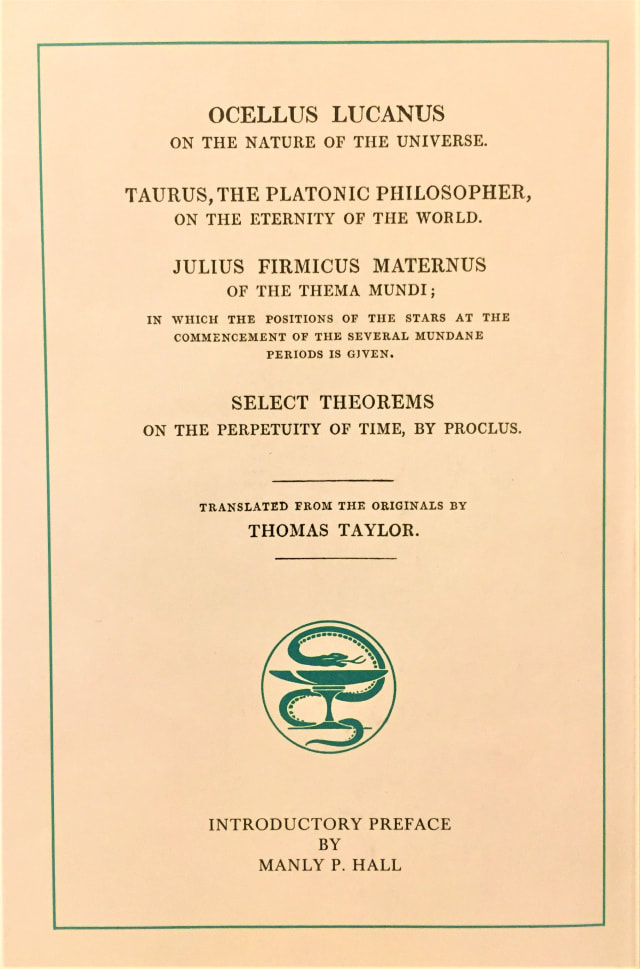 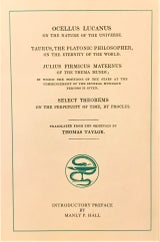 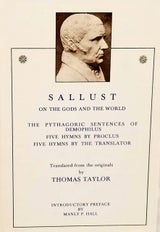 Sallust: “On the Gods & the World” and Other Works

Sallust was a Neoplatonic philosopher who is said to have written this work for Emperor Julian in the 4th Century AD.

Taylor’s added notes and commentary give valuable insight into the text’s essential meaning. Includes translations of The Pythagoric Sentences of Demophilius and Proclus’ Five Hymns.

Photographic facsimile of a rare 1795 edition.

Ocellus Lucanus : “On the Nature of the Universe” & Extracts from Taurus, Julius Firmicus Maternus, and Proclus

This PRS Edition features an Introductory Preface by Manly P. Hall, and the text appears in the original 17th-century typeface, with spelling indicative of the period.

The group of brief translations and extracts which Thomas Taylor combined in this volume may be considered as dealing with astrotheology. Ocellus Lucanus, a Pythagorean philosopher, born in the 5th century BC, was perhaps a pupil of Pythagoras himself.

Taurus Berytius flourished under Marcus Antoninus, and the original of his Fragment is only to be found in the treatise of "Philoponus against Proclus", “On the Eternity of the World.”Julius Firmicus Maternus was one of the most famous early astrologers and is second in authority only to Ptolemy of Alexandria. He wrote in the fourth-century ad, but it was not until 1975 that his principal text, Libri Matheseos appeared in English. The horoscope of the world which is included is from the 1533 edition of the Libri Matheseos.