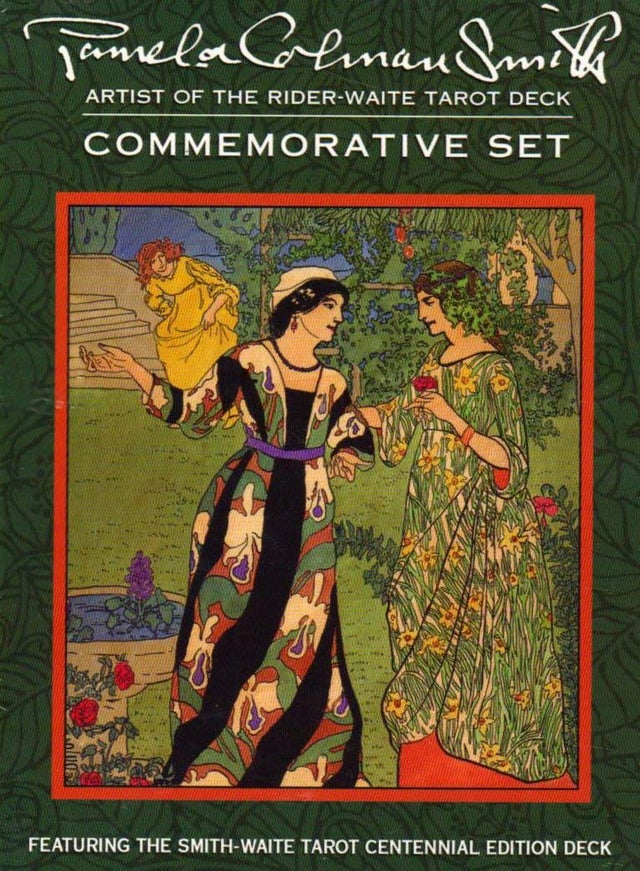 The deluxe set includes the Smith-Waite Centennial Tarot Deck and two books; The Artwork and Times of Pamela Colman Smith, by Stuart R. Kaplan and Lynn Araujo, with over 100 examples of her non-tarot art, and The Pictorial Key to the Tarot by Arthur Edward Waite, in a new format. The Smith-Waite Centennial Edition Tarot Deck is reproduced from the original 1909 deck and comes with a 78-card deck with drawstring organza bag.

The set also includes: 2 prints of Pamela Colman Smith, one photo and one self-portrait, both 5” x 7” suitable for framing; six color postcards of artwork by Pamela Colman Smith; and Spread Sheet Guide. Everything is attractively packaged in a deluxe keepsake case.

She was born February 16, 1878, in Middlesex, England to American parents. Her childhood years were spent between London, New York, and Kingston, Jamaica. During her teens, she traveled throughout England with the theatre company of Ellen Terry and Henry Irving. Thereafter, she began formal art training at the Pratt Institute of Brooklyn, graduating in 1897.

Although American by birth, she returned to England, where she became a theatrical designer for miniature theatre, and an illustrator -- mainly of books, pamphlets and posters.

Around 1903, she joined the Order of the Golden Dawn. In 1909, under the guidance of Arthur Edward Waite, she undertook a series of seventy-eight allegorical paintings described by Waite as a rectified tarot pack. The designs, published in the same year by William Rider and Son, exemplify the mysticism, ritual, imagination, fantasy, and deep emotions of the artist.

Pamela Colman Smith would all but be forgotten except for the seventy-eight tarot paintings known as the Rider-Waite Tarot pack. She would no doubt be astonished and gladdened to know that today the deck touches the hearts and emotions of millions of people.