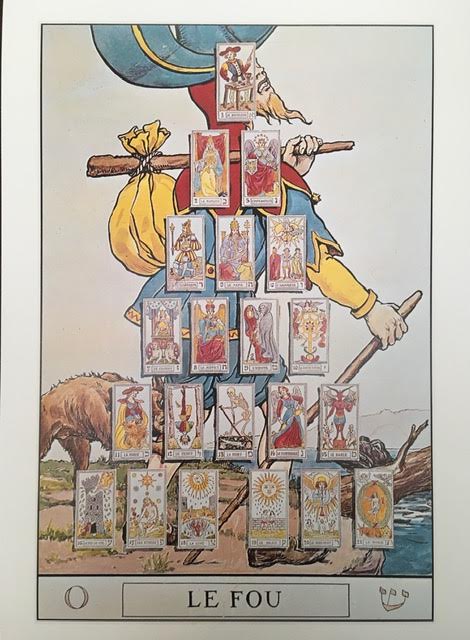 A Layout of Major Trumps

by J. Augustus Knapp commissioned by Manly P. Hall for The Secret Teachings of All Ages

"The Tarot consists of a deck of 78 curiously emblazoned cards of certain origin and date. The deck is divided into two general sections, of which the larger contains 56 cards- termed the minor trumps- and the smaller, 22 cards- termed the major trumps. The minor trumps are further divided into four suits- each containing 14 cards- somewhat similar to those of modern playing cards. The four suits are called Rods (Clubs), Swords (Spades), Cups (Hearts), and Coins (Diamonds). The pip cards of each suit ascend from the ace to the 10, and their denominations are shown by groups of their respective emblems, as 6 Rods, 4 Cups, 9 Coins, or 3 Swords. The court cards of each suit are four in number, termed King, Queen, Knight, and Page. The Kings and Queens are usually depicted seated, the Knights on horseback, and the Pages standing. Each holds the emblem of its suit. The major trumps are also divided into two sections, one of which is composed of 21 cards, usually numbered, and the other of a single card, either unnumbered or marked with a cipher. The accepted order of the 21 cards with their names is as follows. (1) the Juggler; (2) the High Priestess, or Female Pope; (3) the Empress; (4) the Emperor; (5) the Pope; (6) the Lovers, or Marriage; (7) the Chariot; (8) Justice; (9) the Hermit; (10) the Wheel of Fortune; (11) Strength; (12) the Hanged Man; (13) Death; (14) Temperance; (15) the Devil (16) the Fire from Heaven; (17) the Stars; (18) the Moon; (19) the Sun; (20) the Judgement; and (21) the World. The unnumbered card upon which the others are spread is designated the Fool."-Manly P. Hall The Secret Teachings of All Ages