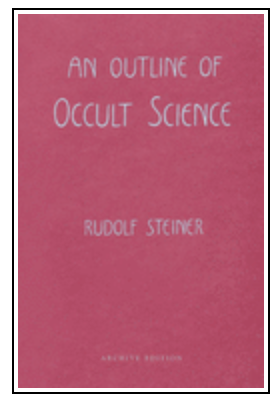 AN OUTLINE OF OCCULT SCIENCE

This masterwork of esotericism places humankind at the very heart of the vast, invisible processes of cosmic evolution. When we use the term "natural science," don't we mean that we are dealing with human knowledge of nature?

Steiner worked and reworked his Rosicrucian cosmology to make it increasingly precise and accurate. An Outline of Esoteric Science is as vital and relevant now as it was when first published in 1910 and remains the most comprehensive and effective presentation of a spiritual alternative to contemporary, materialistic cosmologies and a strict Darwinian view of human nature and evolution.

In this foundational work of spiritual science, we see how the creation and evolution of humanity is embedded at the heart of the vast, invisible web of interacting cosmic beings, through whom the alchemical processes of cosmic evolution continue to evolve. Included are descriptions of the physical-spiritual makeup of the human being; the relationships of the different "bodies" of the human being to sleep and death; and a detailed, practical guide to methods and exercises, including the "Rose Cross Meditation," through which we can attain knowledge of the spiritual worlds.

The most remarkable and revolutionary aspect of this work is the central function that Steiner attributes to the Christ and his involvement in human and earthly evolution through the Mystery of Golgotha.

This volume is a translation by Maud and Henry B. Monges of Geheimwissenschaft im Umriss (GA 13). The translation was revised for this 1972 edition by Lisa D. Monges.

Rudolf Steiner (1861-1925) was born in the small village of Kraljevec, Austro-Hungarian Empire (now in Croatia), where he grew up (see right). As a young man, he lived in Weimar and Berlin, where he became a well-published scientific, literary, and philosophical scholar, known especially for his work with Goethe's scientific writings. At the beginning of the twentieth century, he began to develop his early philosophical principles into an approach to systematic research into psychological and spiritual phenomena. Formally beginning his spiritual teaching career under the auspices of the Theosophical Society, Steiner came to use the term Anthroposophy (and spiritual science) for his philosophy, spiritual research, and findings. The influence of Steiner's multifaceted genius has led to innovative and holistic approaches in medicine, various therapies, philosophy, religious renewal, Waldorf education, education for special needs, threefold economics, biodynamic agriculture, Goethean science, architecture, and the arts of drama, speech, and eurythmy. In 1924, Rudolf Steiner founded the General Anthroposophical Society, which today has branches throughout the world. He died in Dornach, Switzerland.