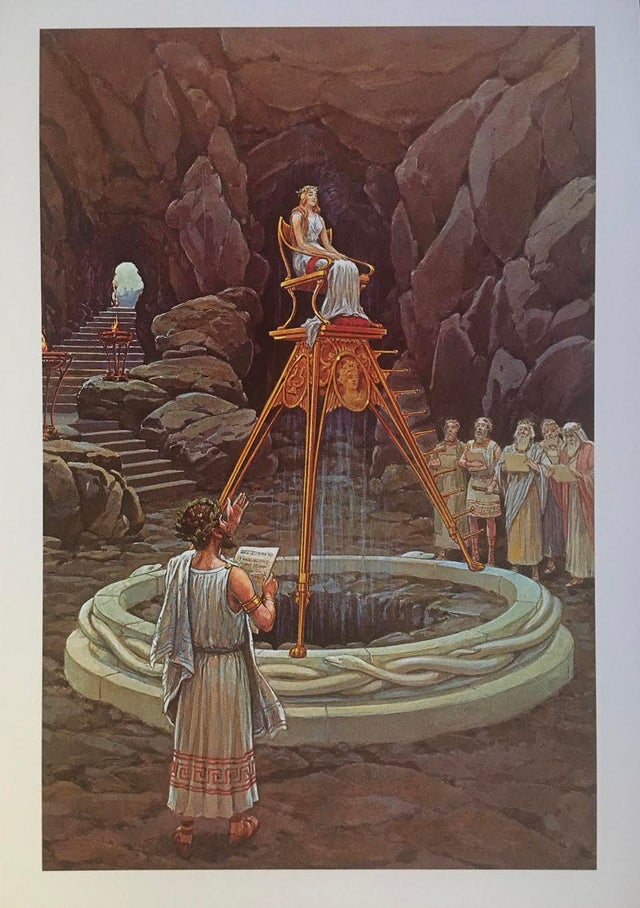 Consulting the Oracle of Delphi

reproduction by J. Augustus Knapp for The Secret Teachings of All Ages

While the tripod and its base as here shown differ from the description of several authors, an attempt has been made to follow as closely as possible the symbolism concealed within the allegory of the oracle. The Delphic Mysteries used the oracle as their chief symbol, and it is the spiritual esoteric mystery rather than the historical and consequently unimportant aspect with which the student of symbolism is interested. While the spirit inhabiting the fumes which rose continuously from the fissure entered into the body of the priestess, the tripod vibrated as though struck severe and repeated blows. Loud clangings were heard, which echoed through the cavern. The din increased as the control of the dæmon over the priestess became more complete, and the rattling and crashing did not cease until the spirit released its hold upon the Pythia. The three legs of the tripod symbolize the three periods of time controlled by Apollo, namely, the past, the present, and the future. The space enclosed by the legs of the tripod forms the sacred Pythagorean tetrahedron with the prophetess seated upon its apex. As the priestess of Delphi is held aloft over the abyss of the oracle, supported only by three slender legs ending in claws, so the spiritual nature of man is suspended over the abyss of oblivion by three golden threads of Divine power. The face of Apollo appears upon the tripod, and around the base are coiled serpents to symbolize Python, whose decaying body lies beneath the Delphic shrine. –Manly P. Hall, The Secret Teachings