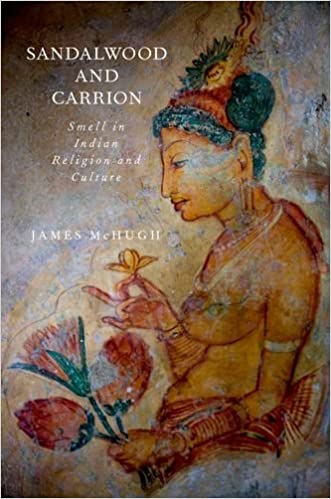 Sandalwood and Carrion: Smell in Indian Religion and Culture

James McHugh offers the first comprehensive examination of the concepts and practices related to smell in pre-modern India. Drawing on a wide range of textual sources, from poetry to medical texts, he shows the significant religious and cultural role of smell in India throughout the first millennium CE.

McHugh describes the arts of perfumery developed in royal courts, temples, and monasteries, which were connected to a trade in exotic aromatics. Through their transformative nature, perfumes played an important part in every aspect of Indian life from seduction to diplomacy and religion. The aesthetics of smell dictated many of the materials, practices, and ceremonies associated with India's religious culture. McHugh shows how religious discourses on the purpose of life emphasized the pleasures of the senses, including olfactory experience, as valid ends in themselves. Fragrances and stenches were analogous to certain values, aesthetic or ethical, and in a system where karmic results often had a sensory impact-where evil literally stank-the ethical and aesthetic became difficult to distinguish. Through the study of smell, McHugh strengthens our understanding of the vital connection between the theological and the physical world.

Sandalwood and Carrion explores smell in pre-modern India from many perspectives, covering such topics as philosophical accounts of smell perception, odors in literature, the history of perfumery in India, the significance of sandalwood in Buddhism, and the divine offering of perfume to the gods.