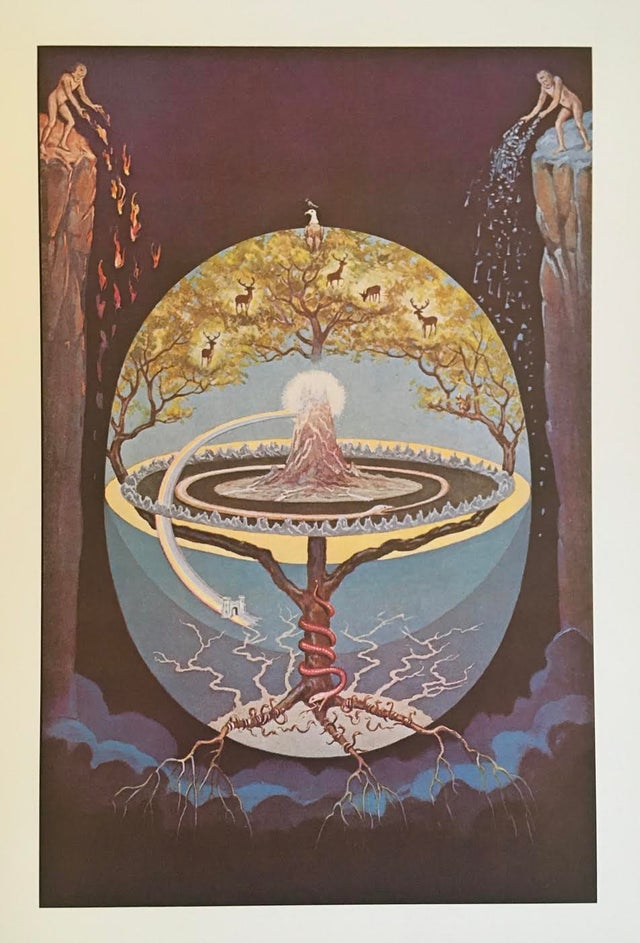 In Ginnungagap, the great cleft in space. All-Father created the huge world ash tree -- Yggdrasil -- the symbol of Life, Time, and Destiny. The three roots of the tree are called the spiritual, the terrestrial, and the infernal. They signify respectively spirit, organization, and matter, according to Clement Shaw. The spiritual root has its source in Asgard, the home of the Aesir, or gods, and is watered by the Urdar fountain; the terrestrial root has its source in Midgard, the abode of men, and is watered by Mimir’s well; the infernal root has its source in Nifl-heim, the abode of the dead, and is watered by the spring Hvergelmir. The three branches of the tree support. Midgard, or the earth, in the midst of which rises the sacred mountain upon whose summit stands the city of the gods. In the great sea surrounding the earth is Jormungand, the Midgard snake, with its tail in its mouth, Bounding the sea is the wall of cliffs and ice fashioned from Ymir’s eyebrows. The home of the gods above is connected by the Bifrost bridge to the dwelling place of men and infernal creatures below. On the topmost branch of the tree -- which is called Lerad, meaning peace-giver -- sits a great eagle. Between the yes of the eagle is the falcon, Vedfolnir, whose piercing glance notes all things taking place in the universe.

The never-withering green leaves of the divine tree serve as pasturage for Odin’s goat, Heidrun, who supplies the drink of the gods. The stags -- Dain, Dvalin, Duneyr, and Durathor-- also graze upon the leaves of the tree, and from their horns drops honey dew upon the earth.

Ratatosk, the squirrel, is the embodiment of the spirit of gossip, and running back and forth between the eagle above and Nidhug the serpent, below, seeks to sir up discord between them. In the world of darkness below, Nidhug continually gnaws at the roots of the divine tree. He is assisted by numerous worms, all realizing that if they can destroy the life of the tree the rule of the gods will cease. On either side of the great tree are the primordial giants casting ice and flames in Ginnungagap. –Manly. P. Hall, The Secret Teachings of all Ages