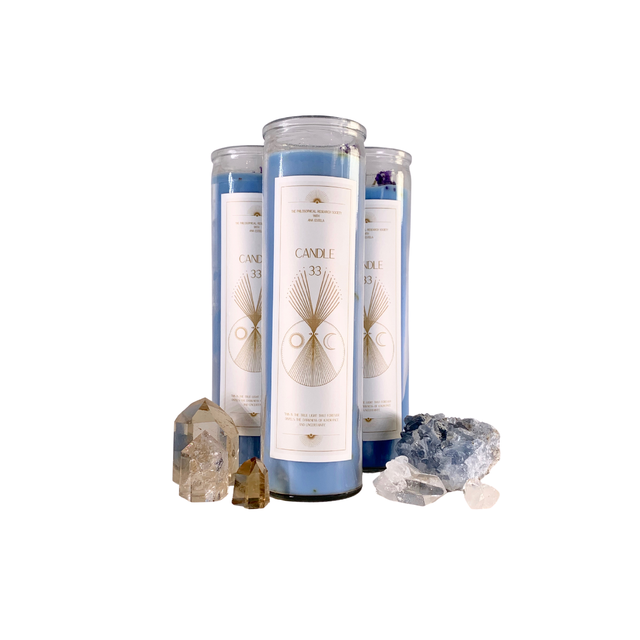 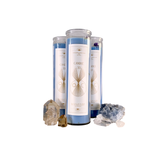 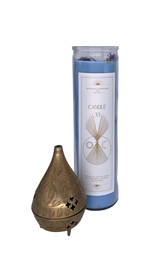 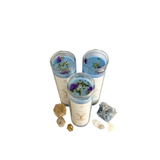 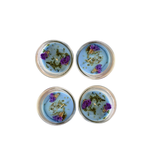 Handmade in small batches and poured in Los Angeles, Ana Estela's candles use a base of soy wax, beeswax, and paraffin.

"This is the true light that forever dispels the darkness of ignorance and uncertainty." -Initiates of the Flame

Candle 33 is an homage to the founder of PRS, Manly P. Hall, and embodies his life's work and philosophy. The name “33” refers to Hall’s recognition as a 33° Mason in 1974, his unusual habit of using invisible ink to initial page 33 in each book of his personal library, and for the numeric symbol of alchemy. As Manly stated in The Secret Teachings of All Ages, “Alchemy is a threefold art, its mystery well symbolized by a triangle. Its symbol is 3 times 3 - three elements or processes in three worlds or spheres.”

For Candle 33, mint was chosen as part of the herbal blend due to its symbolism of refreshment, wisdom, and virtue. Forget-me-not flowers were added as a reminder of connections that endure all challenges and measures of time and in loving memory of Mr. Hall. The color blue symbolizes depth, trust, wisdom, and faith.

Candle 33 is infused over the course of three days with Ethereal Aka Dua energy; this energy is a combination of the Unnamed energy and Atmospheric energy in Aka Dua. These energies reside upon the third eye and crown chakras, which are associated with wisdom and a sense of understanding about the universe. By understanding our place in the universe, we can let go of the stresses of material pursuits and begin our inner journey to seek Truth with clarity and sincerity.

In addition to being infused with Aka Dua energies, each candle is read over for three nights from Initiates of the Flame, other selections of Manly's writings and selected poems to further infuse the candle and guide us toward a better understanding of the knowledge we seek.

How to Use Your Candle

Please note: Your candle comes fully charged, dressed, and programmed. Additional dressing may disturb the wax and wick. For safety, be careful when handling the candle while burning as the glass can be hot to the touch. Keep away from the reach of children and pets.

﻿Ana Estela Lloyd was born and raised in South Los Angeles. She is a poet and writer, who has studied anthropology, art, literature, psychology, and sociology. Her voracity in learning led her down a path of logic and science. But after a near-death experience in 2014, during the birth of her son, she began to question everything. That hunger for answers and a brief stint as a Children’s Behavioral Therapist led her to Mostly Angels LA.

Through the various classes and workshops taken at Mostly Angels LA, she began to understand exactly why she was here. The need to nurture and hold space in a compassionate and loving way was not just a trait but a necessity within her community. Ana continues to study esoteric philosophy and mysticism at The Philosophical Research Society.

(Label design by Whitney Salyer, based on Manly Hall's original illustration for Initiates of the Flame, page 6.)