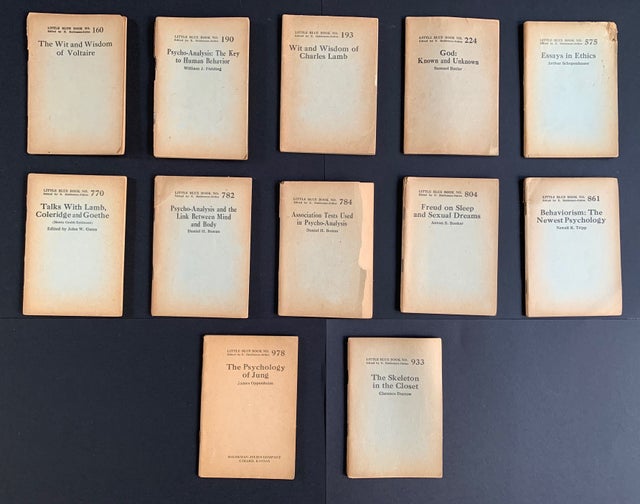 Little Blue Books were a series of small staple-bound books published from 1919 through 1978 by the Haldeman-Julius Publishing Company of Girard, Kansas. They were extremely popular, and achieved a total of 300-500 million booklets sold over the series' lifetime.

Most were sold by mail order and promoted through sensationalistic advertisements (e.g. “At last! Books are cheaper than hamburgers!”) in newspapers and magazines such as Life, Popular Science, and Ladies' Home Journal. To save ad space, only the book titles were listed, organized by topic headings such as “Philosophy,” “How-To,” or “Literature.”

The works covered were frequently classics of Western literature. Goethe and Shakespeare were well represented, as were the works of the Ancient Greeks, and more modern writers like Voltaire and H.G. Wells. Many of the topics the Little Blue Books covered were on the cutting edge of societal norms. Alongside books on making candy and classic literature were ones exploring homosexuality and agnostic viewpoints. Shorter works from many popular authors such as Jack London and Henry David Thoreau were published, and young Will Durant wrote a series of Blue Books on philosophy which were republished in 1926 by Simon & Schuster as The Story of Philosophy, a popular work that remains in print today.

Condition: Significant yellowing due to age, some tearing along edges. Some are missing original covers but the text is intact.