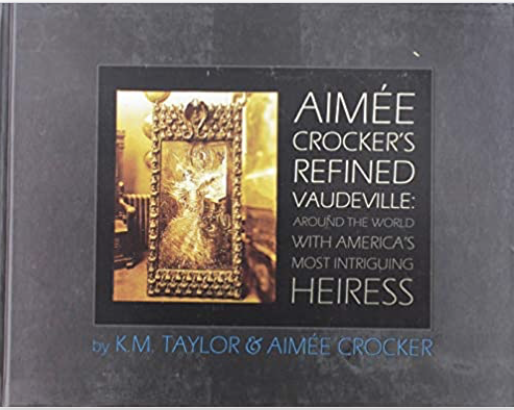 Aimee Crocker's Refined Vaudeville: Around the World with America's Most Intriguing Heiress

Aimee Crocker, America's most intriguing, entertaining and controversial heiress was born during the Civil War and made headlines around the world from the dawn of the Gilded Age until she died in 1941. She was the daughter of tycoon E.B. Crocker and niece of Charles Crocker, who, together with Collis Huntington, Mark Hopkins and Leland Stanford built the western half of the Transcontinental Railroad, the greatest transportation line the world had ever built.

According to K. M. Taylor, author of Aimee Crocker s Refined Vaudeville: Around the World with America s Most Intriguing Heiress it was this monumental achievement living inside Aimee Crocker that afforded her a life of bold risk-taking. Crocker was known from San Francisco and New York, to London, Paris and Tokyo for her extravagant parties, her decade of hair-raising adventures while living in the mysterious Far East, and for her collection of husbands, adopted children, snakes, pearls, Buddhas and tattoos. Crocker was given two official titles: Princess Palaikalani Bliss of Heaven by King David Kalakaua when he gave her one of his Hawaiian islands, and Princess Galitzine the day that she married her fifth and final husband when she was 61 and he was 26.

Aimee Crocker s Refined Vaudeville contains highlights, in Aimee s own words, of a harrowing honeymoon train crash in California, a blood-curdling escape down a jungle river, an abduction by a Dyak prince, a poisoning in Hong Kong, a murder attempt by knife-throwing servants in Shanghai, three weeks in the harem of Bhurlana, a search for Kaivalya (Liberation) at the cave of the Great Yogin Bhojaveda in Poona, and two bizarre sensual experiences, one with an Indian boa constrictor and another with a Chinese violin in the house of the ivory panels. Crocker, the world's first celebutante, was known also for her relationships with actors, painters, literary figures, princes, a king, a maharaja, a chieftain, a Bowery Underworld figure, a legendary occultist, and more than one opera singer. She was a jet setter before there were jets, a great entertainer before there was a movie industry, and a liberated woman before the 19th Amendment. She was, in Taylor's words, both completely of her time, a product of headstrong genetics, a boisterous environment, and a Gilded Age in western civilization, and far ahead of her time an individualized, free-thinking, self-created, citizen of the world.