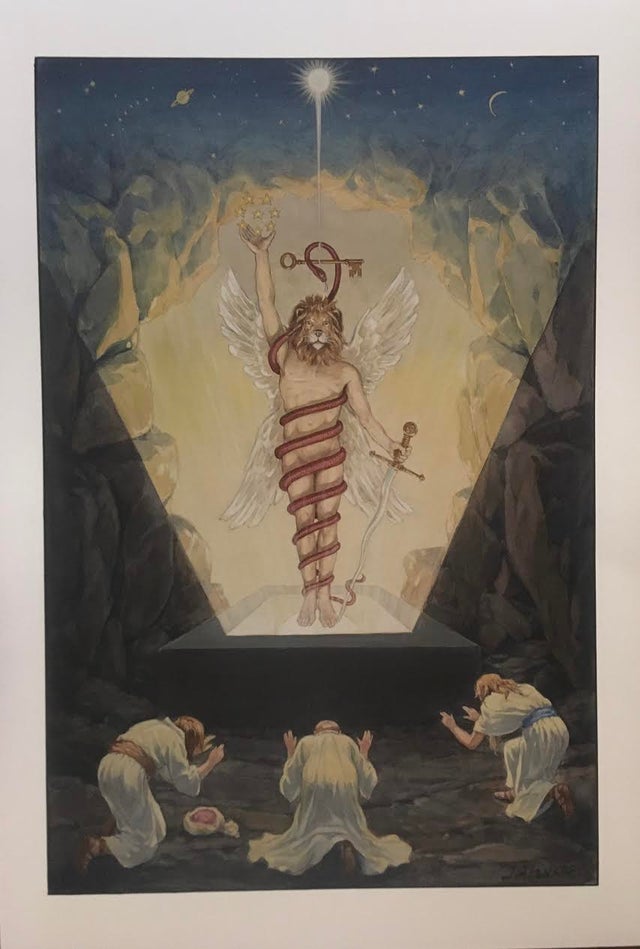 Mithra in the Form of the Leontocephalic Kronos

The figure signifies the inevitable victory of boundless Time (Eternity) over every creature and condition. In Time all beings reach completion; in Time all wrongs are righted; in Time salvation is assured to all. The head of the lion signifies that the mortal concept of Time is the despotic ruler of the animal—or irrational—creation; that its strength is supreme; and that it devours all the lesser powers which exist temporarily within it. The coils of the serpent represent the motion of the heavenly spheres through the zodiac, which is shown as a human body. The golden key indicates that Time is the key to the mystery of existence. The sword is the instrument by which the demon of manmade Time is slain and his body divided into past and future, while to the gods is given rulership of the everlasting now. The double set of wings signifies the flight of Time through the inferior worlds of the four elements, and the eight stars are the spheres upheld by Time. The dome of the Mithraic cave is ornamented with stars to typify the universality of the divine cult, and the radiant glove upon which the figure stands is the universe. The resurrection of the future from the darkness of the tomb reveals the ascension of boundless duration from the narrow limitations of man-conceived time. The three kneeling figures are the limitations of the three-dimensional world—length, breadth, and thickness—which bow before the limitless Aeon.– Manly P. Hall, The Secret Teachings of All Ages