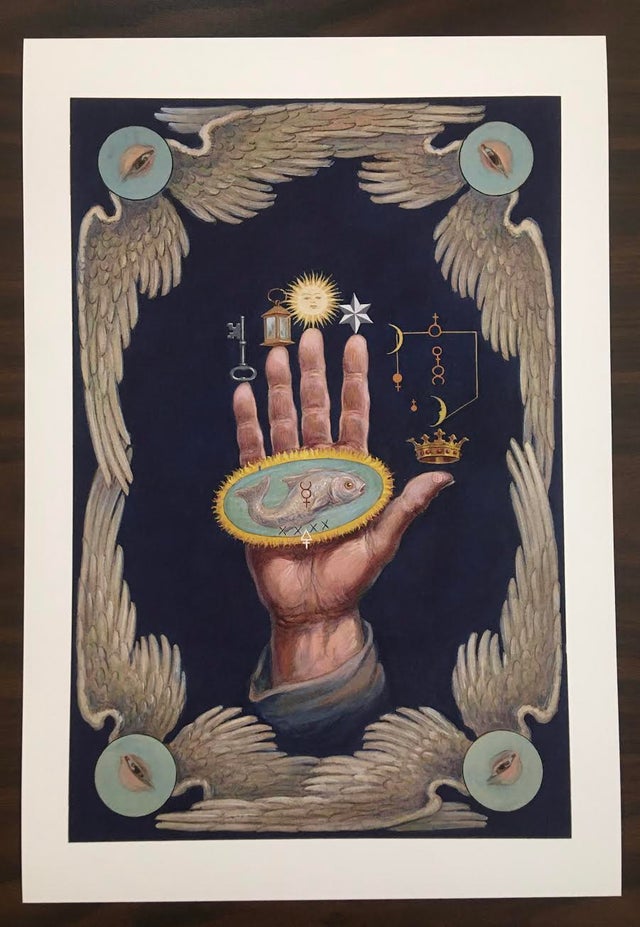 Hand of the Mysteries

The original drawing from which this plate was taken is the hand of the philosopher which is extended to those who enter into the Mysteries. When the disciple of the Great Art first beholds this hand, it is closed, and he must discover a method of opening it before the mystery contained therein may be revealed. In alchemy, the hand signifies the formula for the preparation of the tincture physicorum. The fish is mercury and the flame-bounded sea in which it swims is sulfur, while each of the finders bears the emblem of a Divine Agent through the combined operations of which the Great Work is accomplished...

Philosophically, the key represents the Mysteries themselves, without whose aid man cannot unlock the numerous chambers of his own being. The lantern is human knowledge, for it is a spark of the Universal Fire captured in a man-made vessel; it is the light of those who dwell in the inferior universe and with the aid of which they seek to follow in the footsteps of Truth. The sun, which may be termed the 'light of the world,' represents the luminescence of creation through which man may learn the mystery of all creatures which express through form and number.

The star is the Universal Light which reveals cosmic and celestial verities. The crown is Absolute Light—unknown and unrevealed—whose power shines through all the lesser lights that are but sparks of this Eternal Effulgence. Thus is set forth the right hand, or active principle, of Deity, whose works are all contained within the 'hollow of His Hand.' -- Manly P. Hall, The Secret Teachings of All Ages