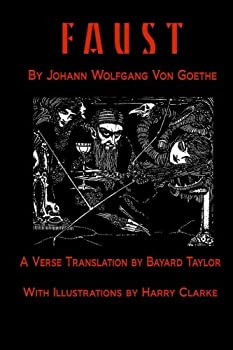 *used book, excellent condition, some signs of wear on cover

Johhan Wolfgang von Goethe's Faust, written between 1806 and 1831, was translated by Bayard Taylor in 1870 and published In 1871. It was illustrated by Harry Clarke in a 1925 edition published by Hartsdale House that was limited to 2,000 copies. Bayard Taylor's translation preserves the beautiful, metered verse and rhyme of von Goethe's adaptation of the legend of Dr. Faust. That translation is faithfully reproduced in this edition as are the famous Harry Clarke illustrations, which are credited with influencing the psychedelic art movement in the 1960's. The eight color plates are reproduced in black and white.