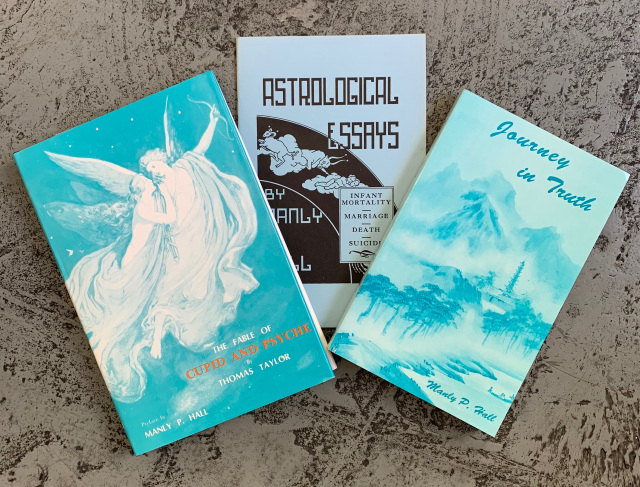 The "Aquas" by Manly P. Hall

Discover some of Manly P. Hall's lesser known works in our bundle series. Each bundle contains three titles for a limited time sale price of $10.

*Translated from the Latin of Apuleius, Taylor's extensive introduction deals with the mystery of the human soul, divine love, and human regeneration.

As the plot of the story develops it is obvious that the supporting philosophical doctrines are derived from the secret teachings of the Mystery Schools. The truths involved were then perpetuated by later sects who sought to restore and preserve the older wisdom.

The human being must sometime face the challenge of his own spiritual needs; by purifying his own emotions he preserves not only himself but the mortal world in which he lives.

The fact that Apuleius was an initiate of the classical Mysteries and among the most enlightened of the Neoplatonists more than justifies the present edition as a major contribution in this field of Platonic psychology.

To the modern psychologist who has become aware of the alchemy of human emotions, the account given by Apuleius should be of extraordinary interest. The author points out that the sacred mystery of love has been generally profaned and associated with mortal passion and that the perversion of the greatest good is the greatest evil.

Covering the period from Orpheus to St. Augustine, this volume includes Pythagoras, Plato, Socrates, Diogenes, Aristotle, Ammonius Saccus, Plotinus and Proclus. The pattern of the Philosophic Empire is revealed to inspire us to the building of a humanitarian world.

A clear and concise survey of constructive philosophy. Great thinkers of the classical world emerge as real persona to be admired and understood.

A companion to Pathways of Philosophy.

This pamphlet explores the astrological aspects of some of life's tougher topics: