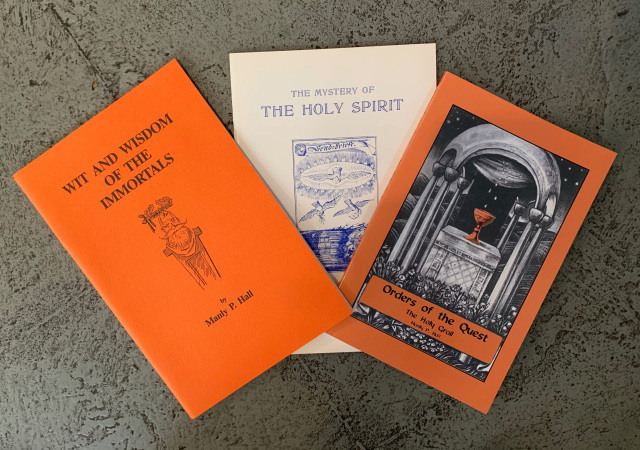 The "Oranges" by Manly P. Hall

Discover some of Manly P. Hall's lesser known works in our bundle series. Each bundle contains three titles for a limited time sale price of $10. '

The legends of chivalry are veiled accounts of man’s eternal search for truth. These beautiful stories are not, however, merely folklore. They are parts of an orderly tradition, unfolding through the centuries and bearing witness to a well-organized plan and program.

Like the myths of classical antiquity, the hero tales are sacred rituals belonging to secret Fraternities perpetuating the esoteric doctrines of antiquity. The origins of the “Grail Legend” begin with Manes, whose philosophy has survived into modern times as the driving force behind Christian Mysticism.

This tradition was perpetuated though the Troubadours, the Knights Templar of Jerusalem, Taliesin the Adept of Britain, the secret Druid assemblies of Wales, Merlin, King Arthur and the Round Table, the Holy Grail, the Grail Kings, Parsifal and Lohengrin.

There are also striking parallels in the search for the mysterious Temple of Shamballah, said to stand on the Imperishable Island in the midst of the Gobi Desert in Mongolia.

The Mystery of the Holy Spirit

Points out how the different human beliefs show a similarity in their conclusion that the human body is the living temple of the living God.

Wit and Wisdom of the Immortals

Witticism and apothegms from the sages of ancient Greece and Rome, including anecdotes applicable to contemporary times.