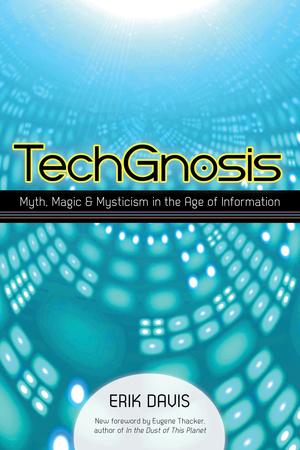 Myth, Magic, and Mysticism in the Age of Information

How does our fascination with technology intersect with the religious imagination? In TechGnosis—a cult classic now updated and reissued with a new afterword and a foreword by Eugene Thacker--Erik Davis argues that while the realms of the digital and the spiritual may seem worlds apart, esoteric and religious impulses have in fact always permeated (and sometimes inspired) technological communication. Davis uncovers startling connections between such seemingly disparate topics as electricity and alchemy; online roleplaying games and religious and occult practices; virtual reality and gnostic mythology; programming languages and Kabbalah. The final chapters address the apocalyptic dreams that haunt technology, providing vital historical context as well as new ways to think about a future defined by the mutant intermingling of mind and machine, nightmare and fantasy.

ErikDavis was born during the Summer of Love within a stone’s throw of San Francisco. He grew up in North County, Southern California, and spent a decade on the East Coast, where he studied literature and philosophy at Yale and spent six years in the freelance trenches of Brooklyn and Manhattan before moving to San Francisco, where he currently resides. He is the author of four books: Nomad Codes: Adventures in Modern Esoterica (Yeti, 2010), The Visionary State: A Journey through California’s Spiritual Landscape(Chronicle, 2006), with photographs by Michael Rauner, and the 33 1/3 volume Led Zeppelin IV(Continuum, 2005). His first and best-known book remains TechGnosis: Myth, Magic, and Mysticism in the Age of Information (Crown, 1998), a cult classic of visionary media studies that has been translated into five languages and recently republished by North Atlantic Press. He has hosted the podcast Expanding Mind on the Progressive Radio Network since 2010, and earned his PhD in Religious Studies from Rice University in 2015.