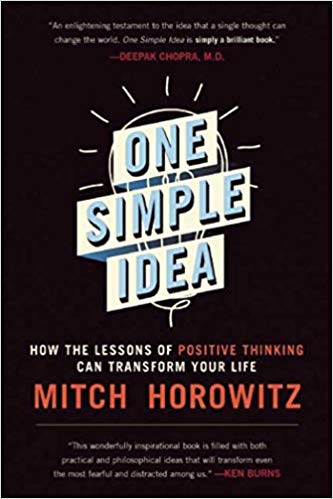 One Simple Idea: How the Lessons of Positive Thinking Can Transform Your Life

From the millions-strong audiences of Oprah and The Secret to the mass-media ministries of evangelical figures like Joel Osteen and T. D. Jakes, to the motivational bestsellers and New Age seminars to the twelve-step programs and support groups of the recovery movement and to the rise of positive psychology and stress-reduction therapies, this idea–to think positively–is metaphysics morphed into mass belief. This is the biography of that belief.

No one has yet written a serious and broad-ranging treatment and history of the positive-thinking movement. Until now. For all its influence across popular culture, religion, politics, and medicine, this psycho-spiritual movement remains a maligned and misunderstood force in modern life. Its roots are unseen and its long-range impact is unacknowledged. It is often considered a cotton-candy theology for New Agers and self-help junkies. In response, One Simple Idea corrects several historical misconceptions about the positive-thinking movement and introduces us to a number of colorful and dramatic personalities, including Napoleon Hill and Norman Vincent Peale, whose books and influence have touched the lives of tens of millions across the world.

Sold Out
Add to Cart